Zihuatanejo Bay is lined with some of the best beaches in the world. The waters calmly caress the shores with a steady beat of small waves.

This is a quick panorama shot looking south from the spot where we first landed on the beach. We cooled off under the shade of the thatched roof patio covers to the left. Almost dead center of this picture is a white hotel on the ridgeline of the hill in the distance. We didn’t know it at the time, but this would be our hotel for the final two nights of our stay. 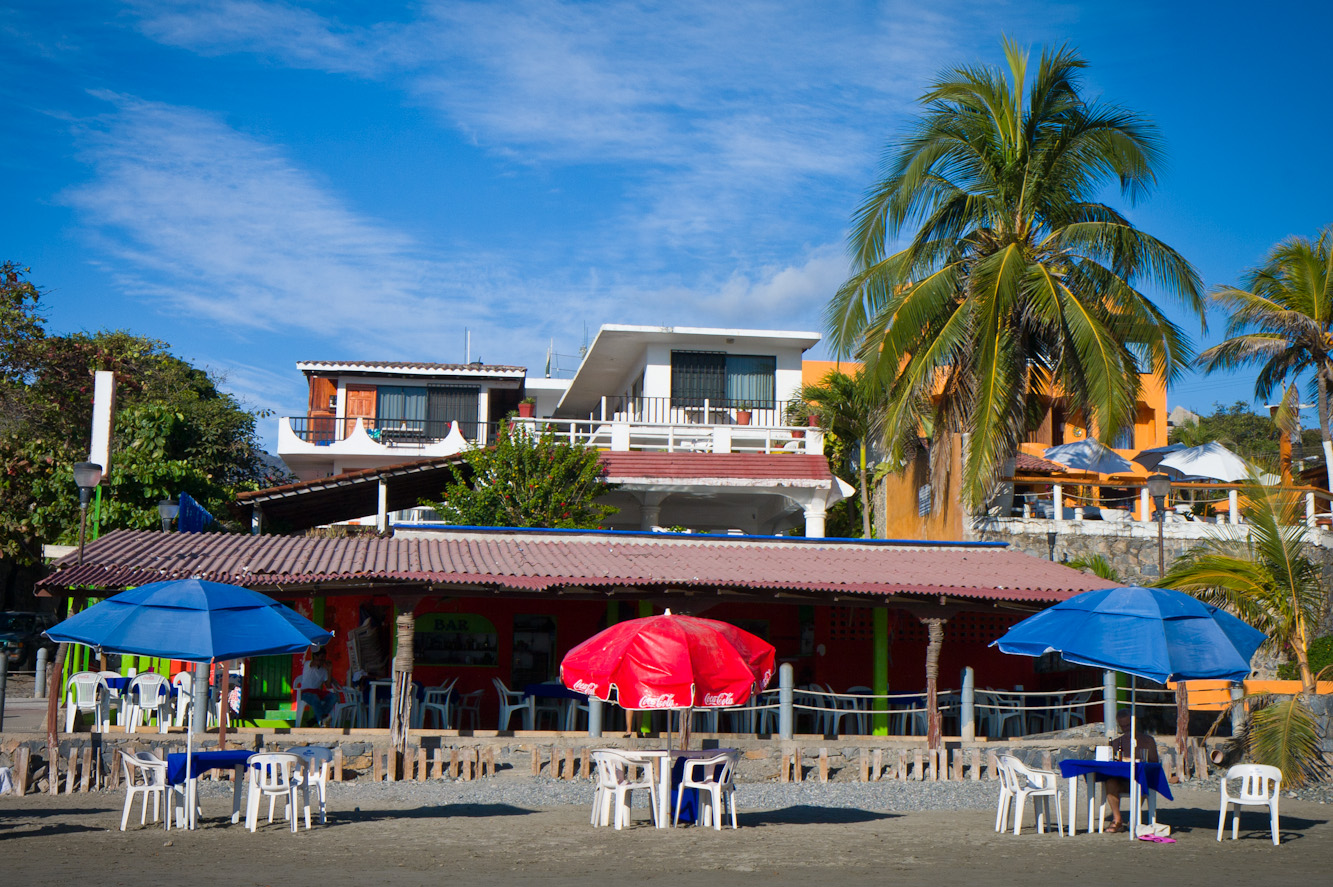 Outdoor restaurant bars like this are found all along the beaches. 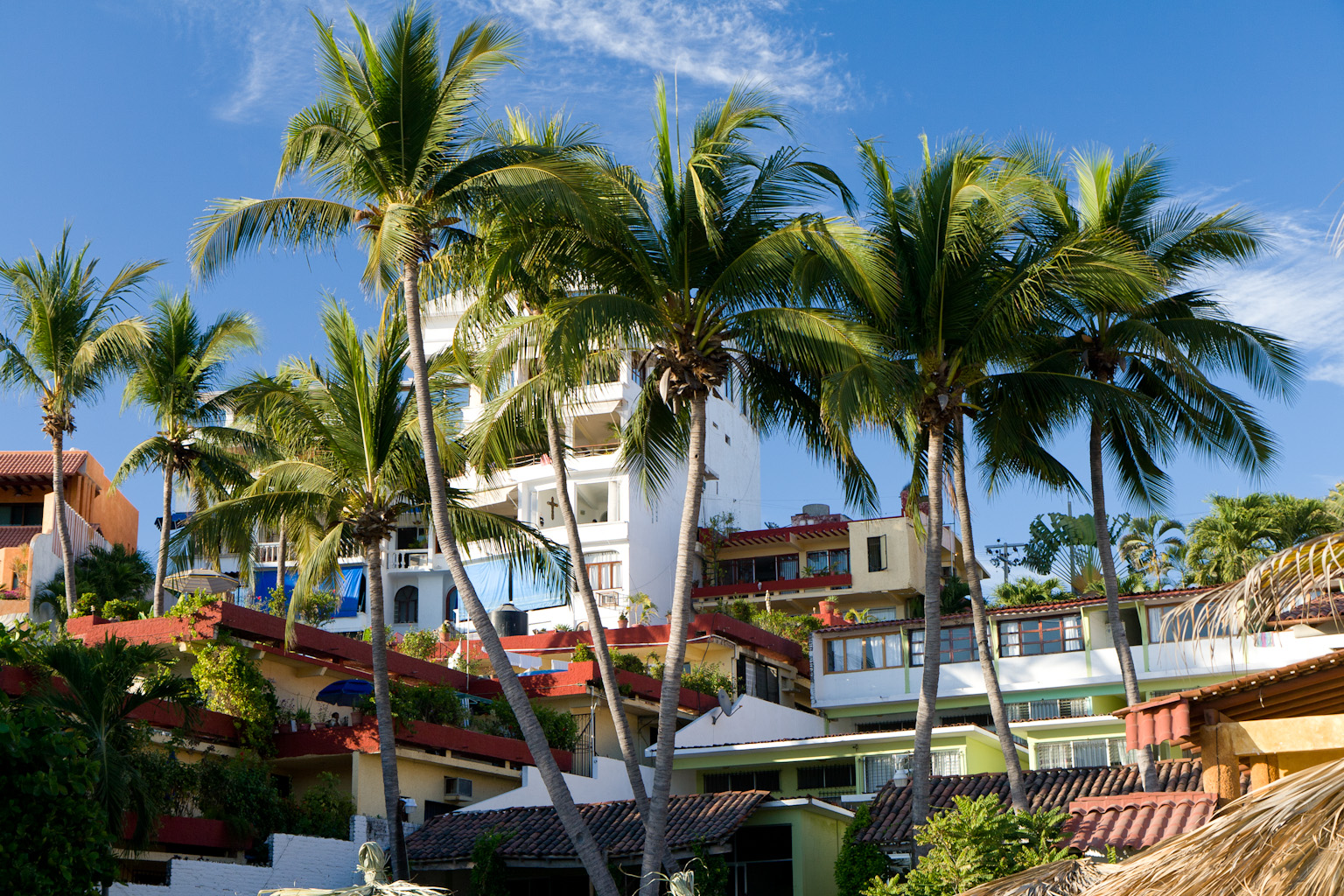 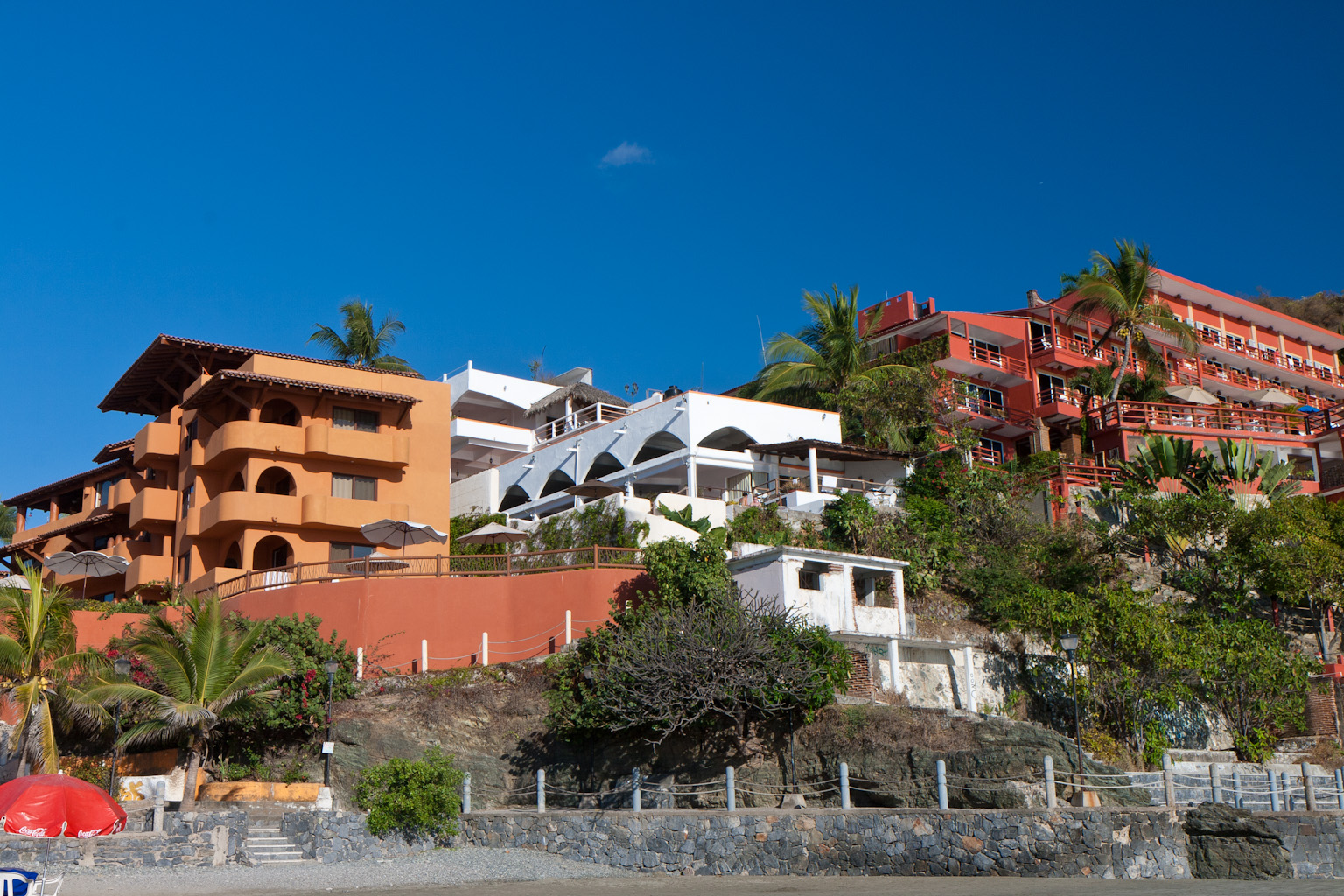 The hills on the South end of the bay are filled with hotels and resorts. Some are old and some are new. They are painted in all different colors, which adds to the vibrancy of the bay. 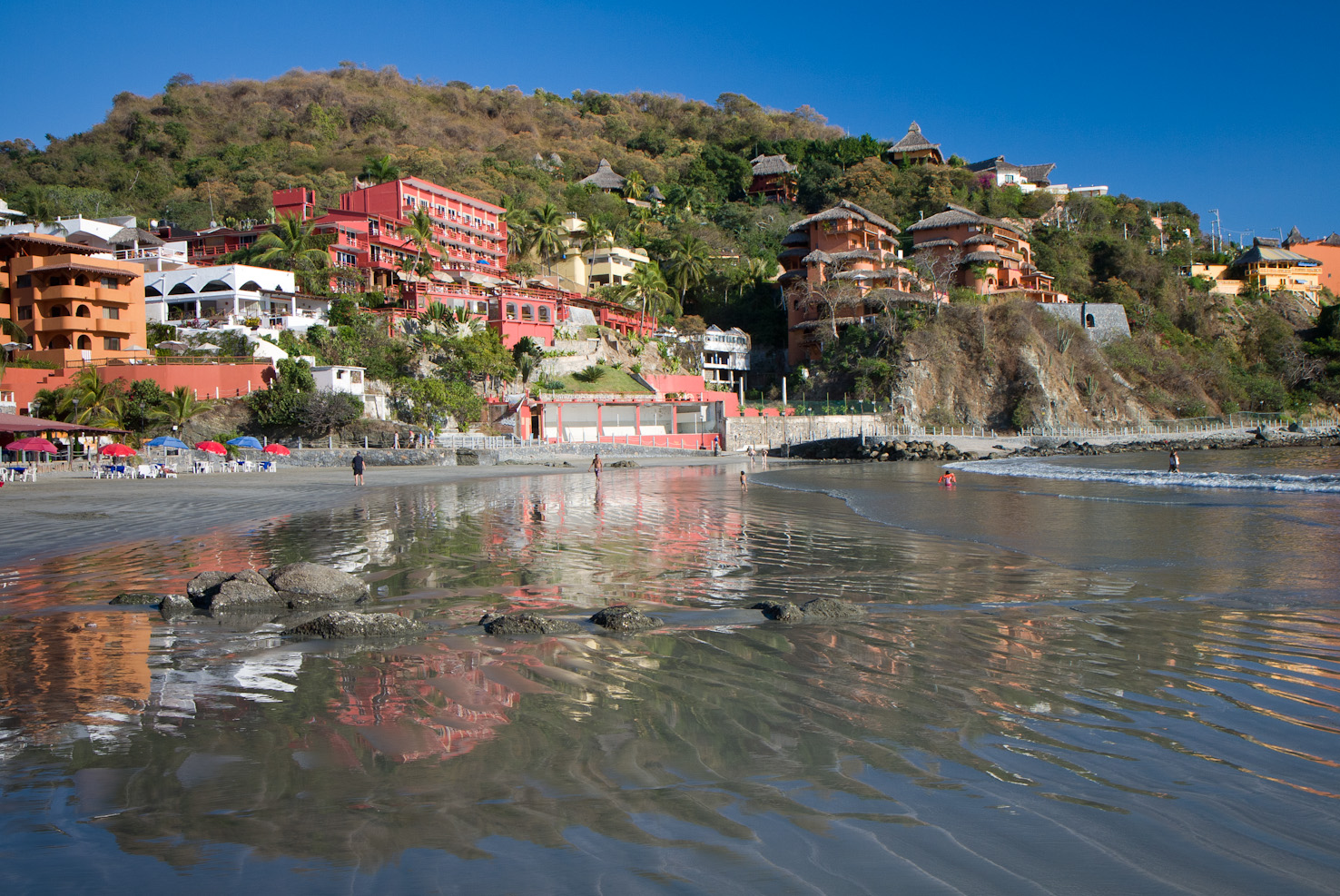 The colorful hotels reflect in the wet sand. I photographed this scene from every distance and angle. Some of my favorite images are the closeup detail shots I took. I will share a couple in a later post. 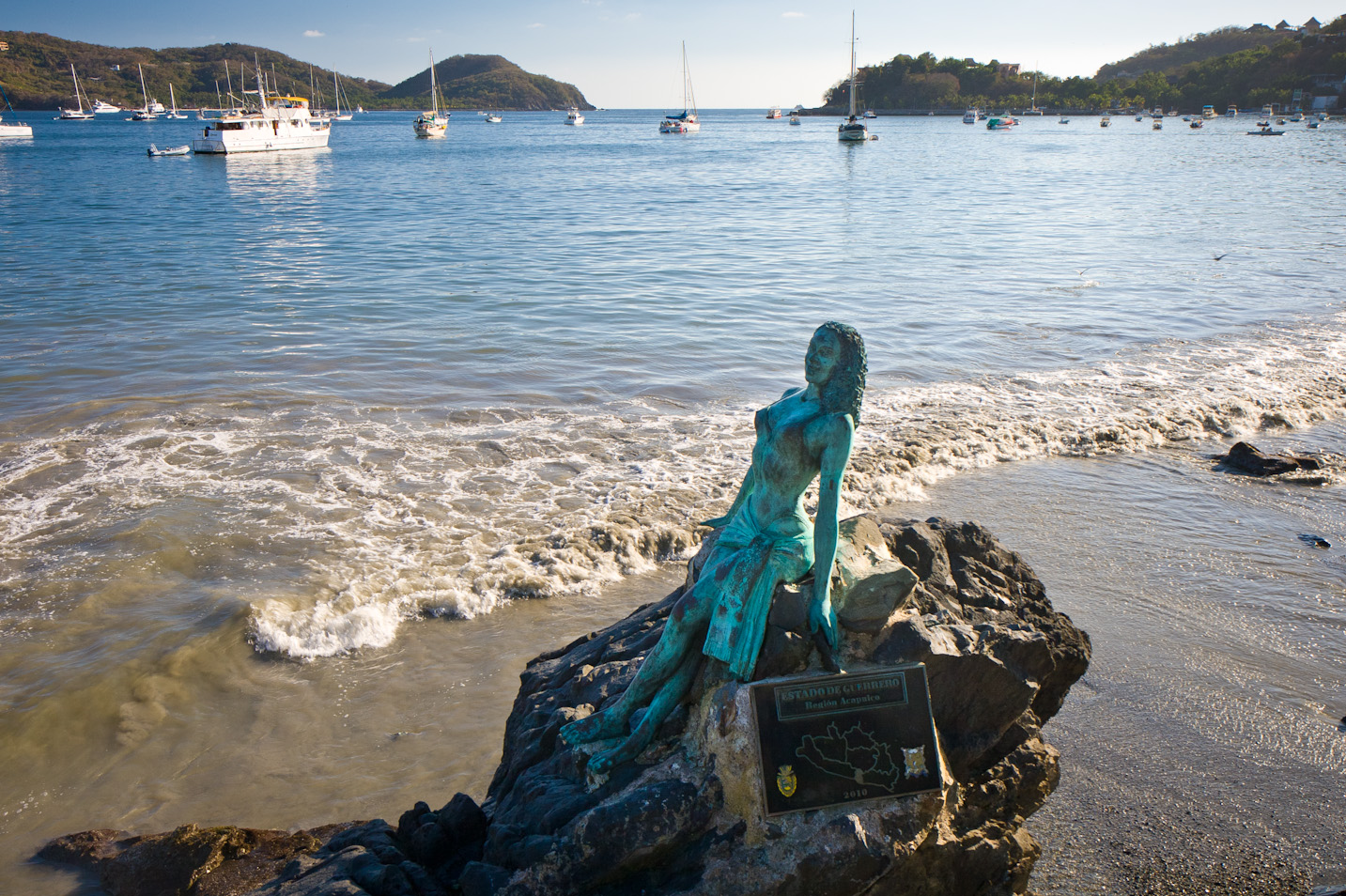 I don’t know what her significance is posing on this rock at waters edge. Her tarnished blue green color is beautiful and I wish I would have taken some better pictures of her. 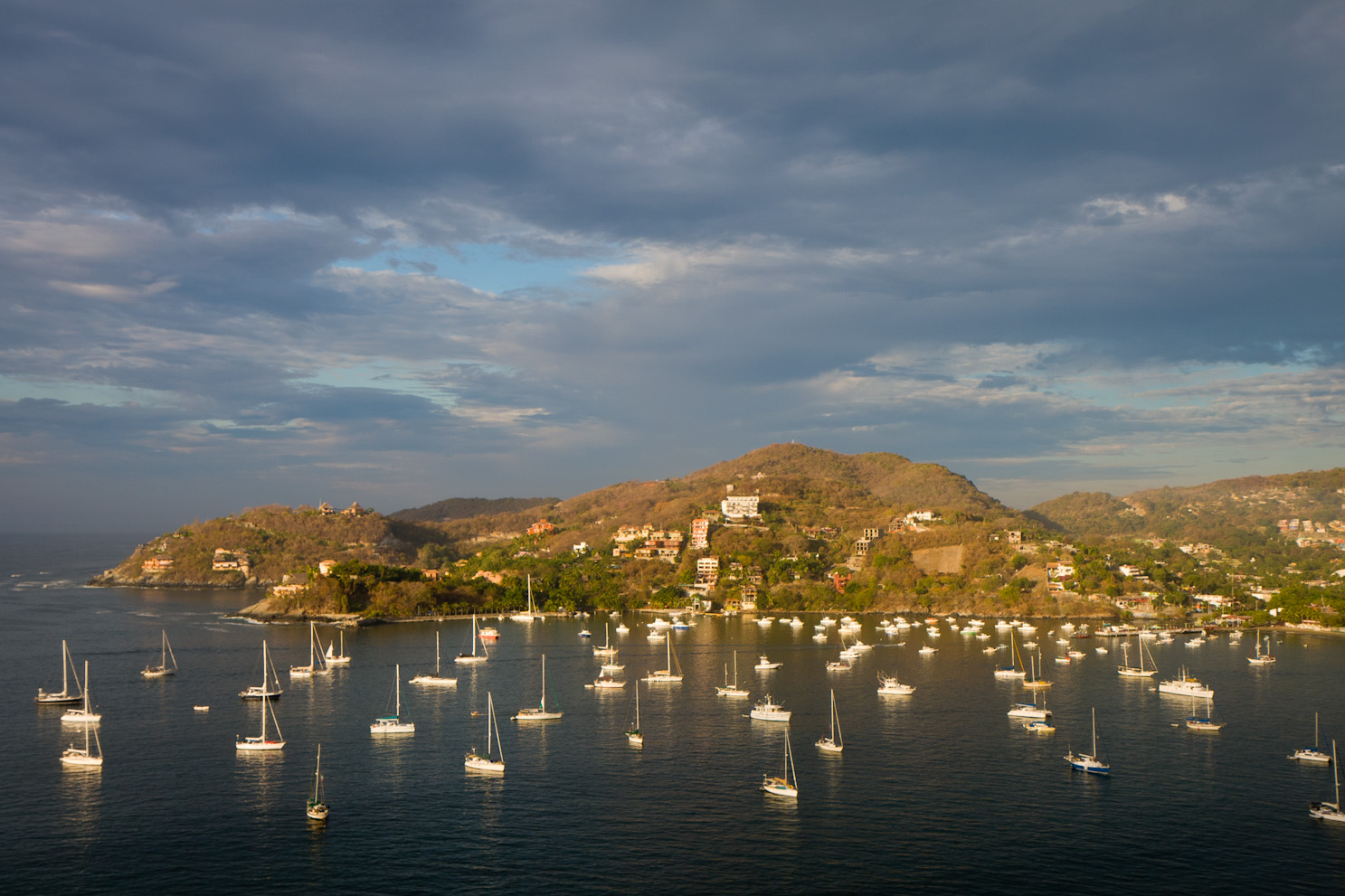 This was shot at sunrise from our hotel on the hill, looking North. 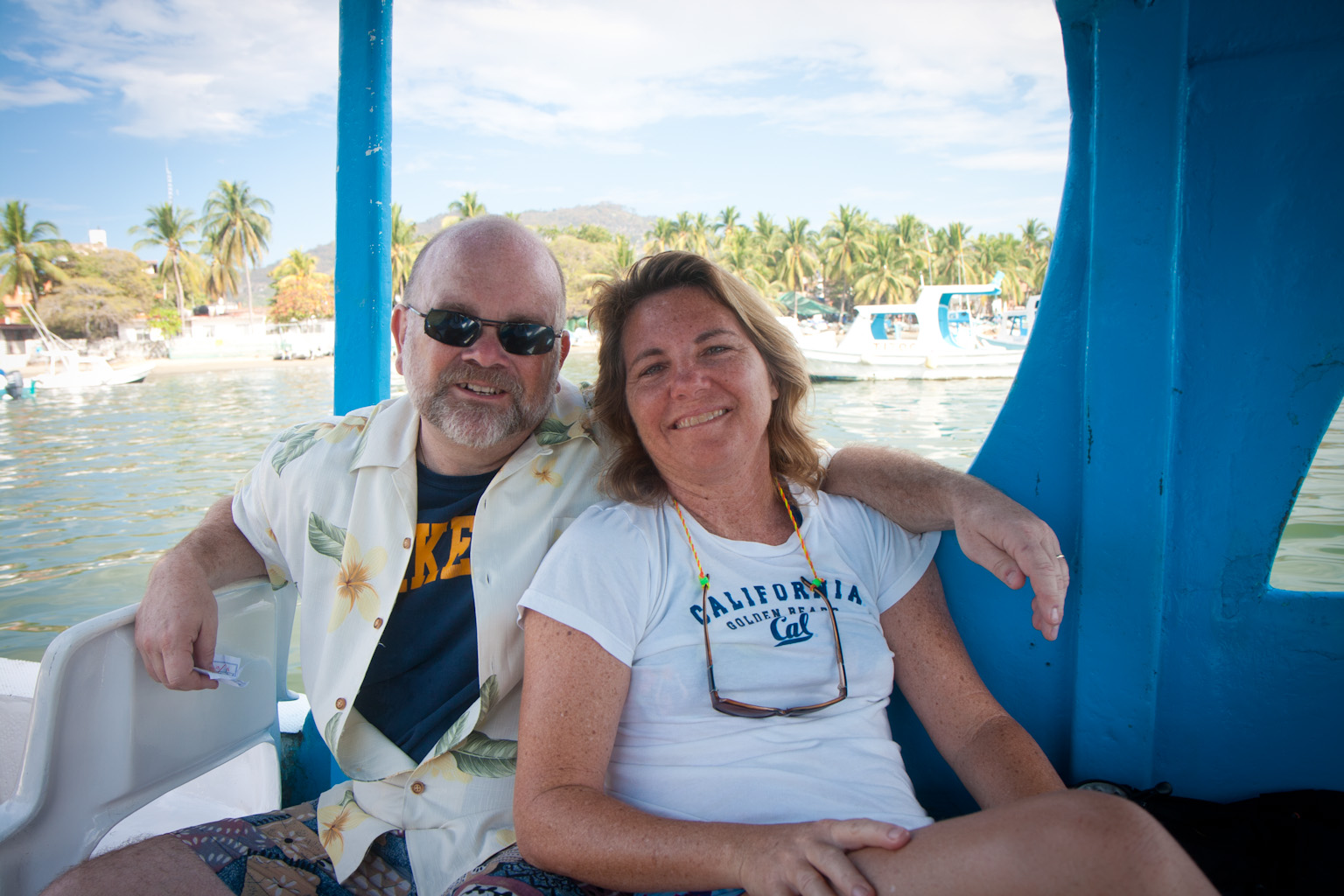 Playa Las Gatas is a semi secluded beach on the South West end of the bay. It can only be reached by ferry boat. I don’t know why I was expecting a real ferry boat lined with padded seats. I’d been here for almost a week and should have known better. The “ferry” boat was nothing more than an old fishing boat. The only other pasenger on the boat was a young gal headed to her job as a beach masseur. The boat was powered by a large plastic barrel filled with gas that sat open on the floor board next to the engine. 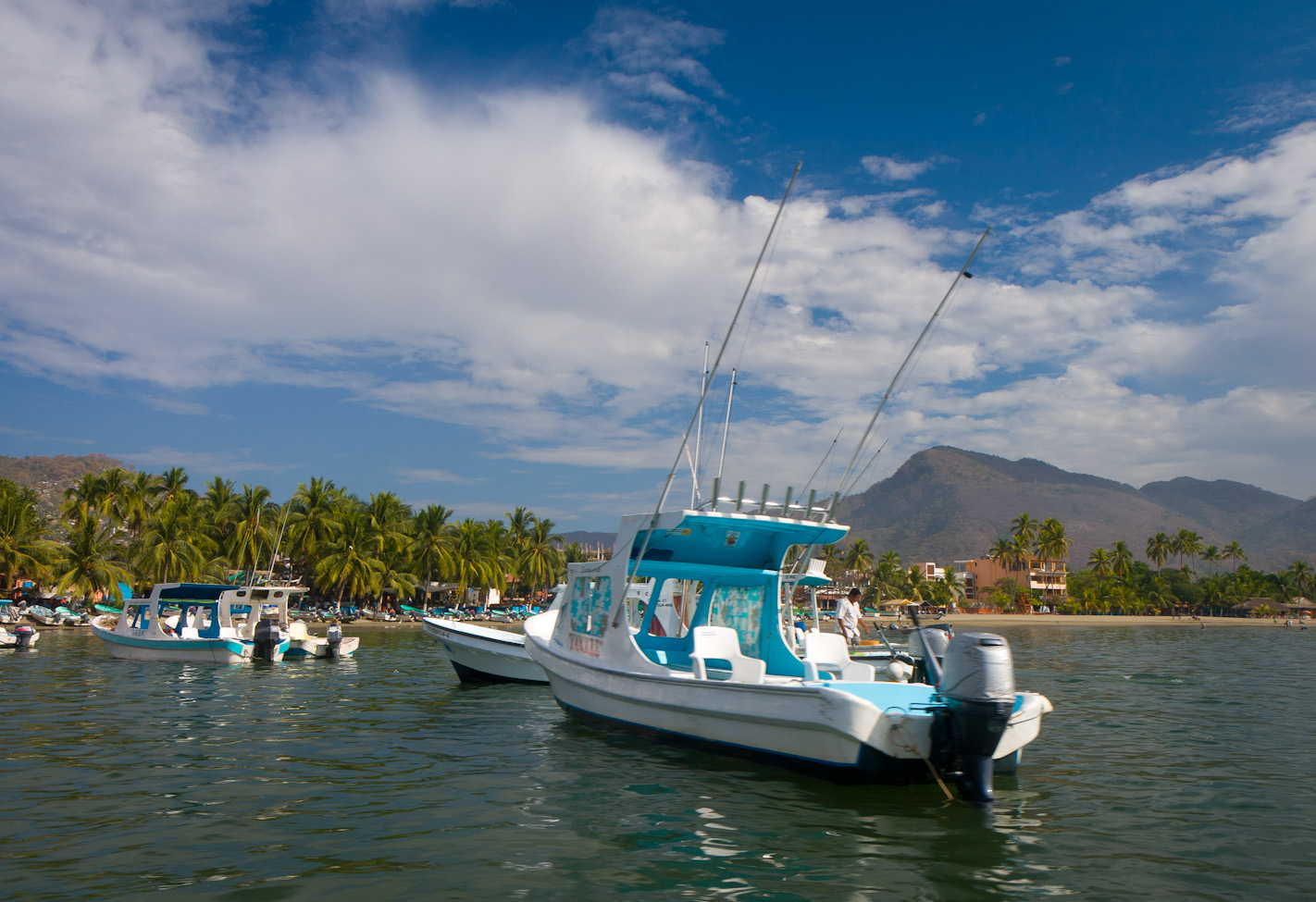 The ferry boat looked a lot like this fishing boat but not as nice. It is very popular for visitors to charter boats like this for a day of great fishing. 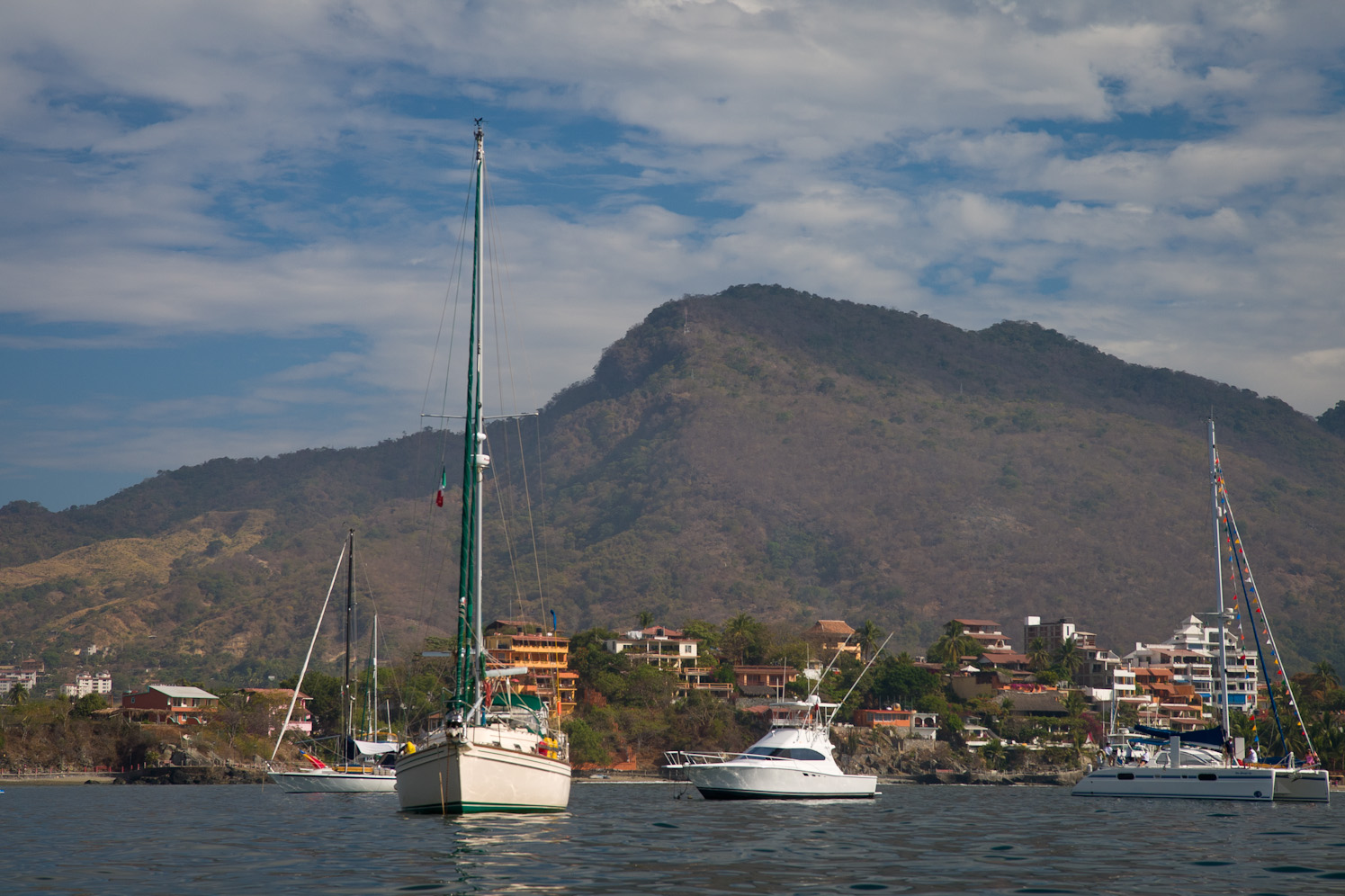 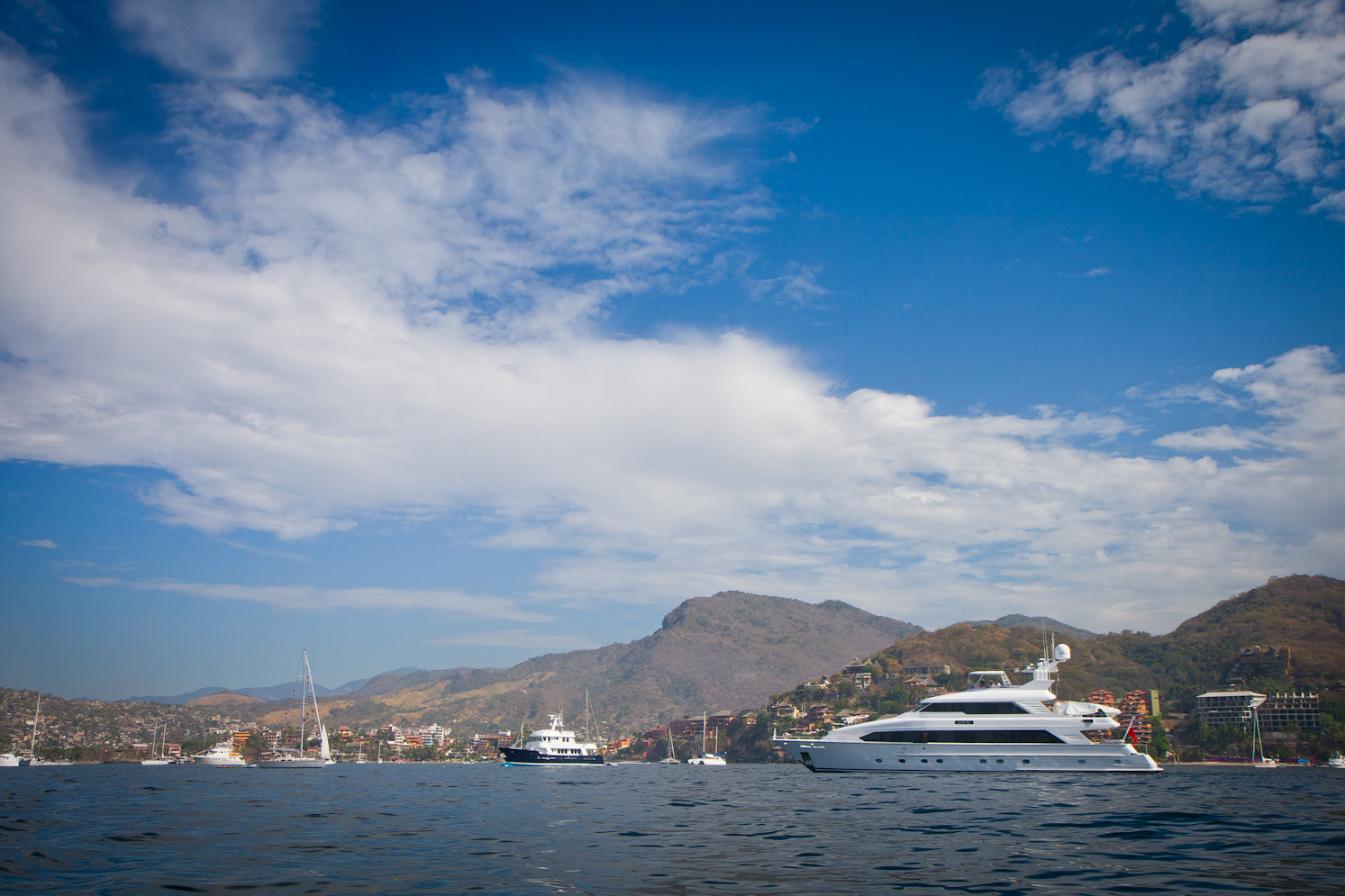 There was a school fund-raiser, sailboat regatta about to take place, so the bay was filled with some really nice boats. Many were from Northern California and Washington State. I wonder how many days it takes to sail from Washington State to Zihuatanejo. 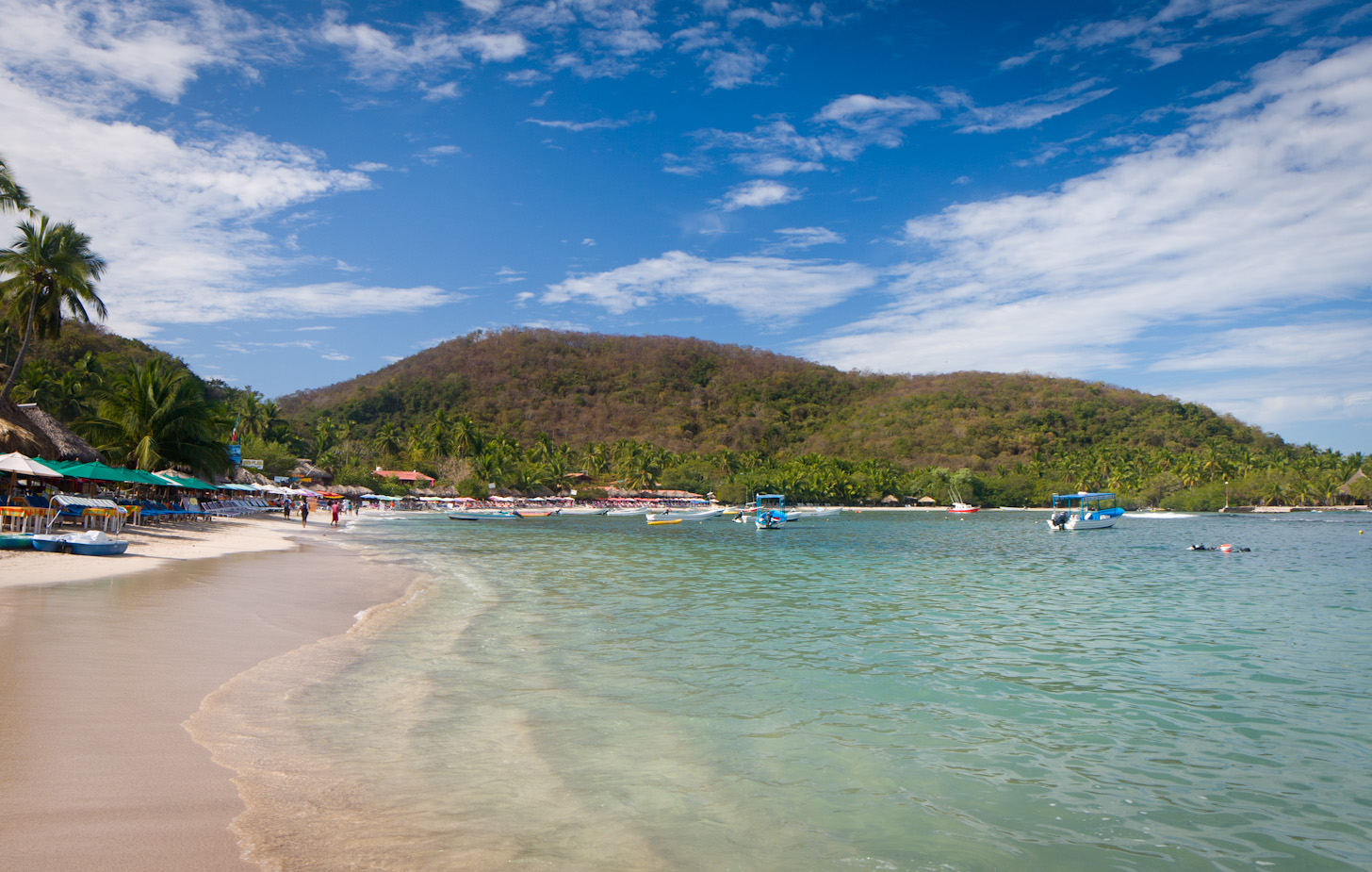 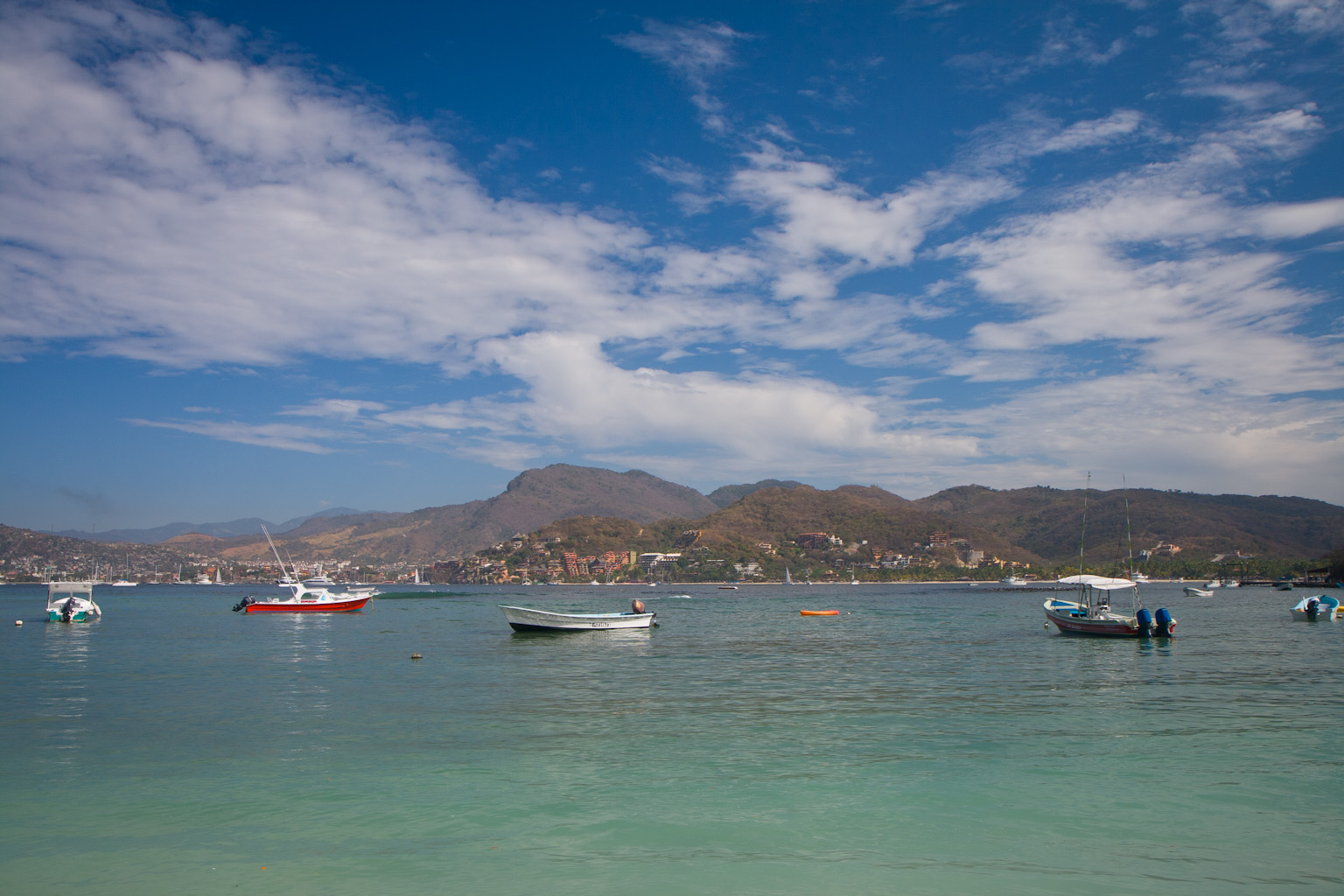 This is Playa Las Gatas. It has clear, calm blue waters and beaches lined with restaurant owners begging us to pick their spot. Every spot is perfect though, and it seemed unfair to have to choose. 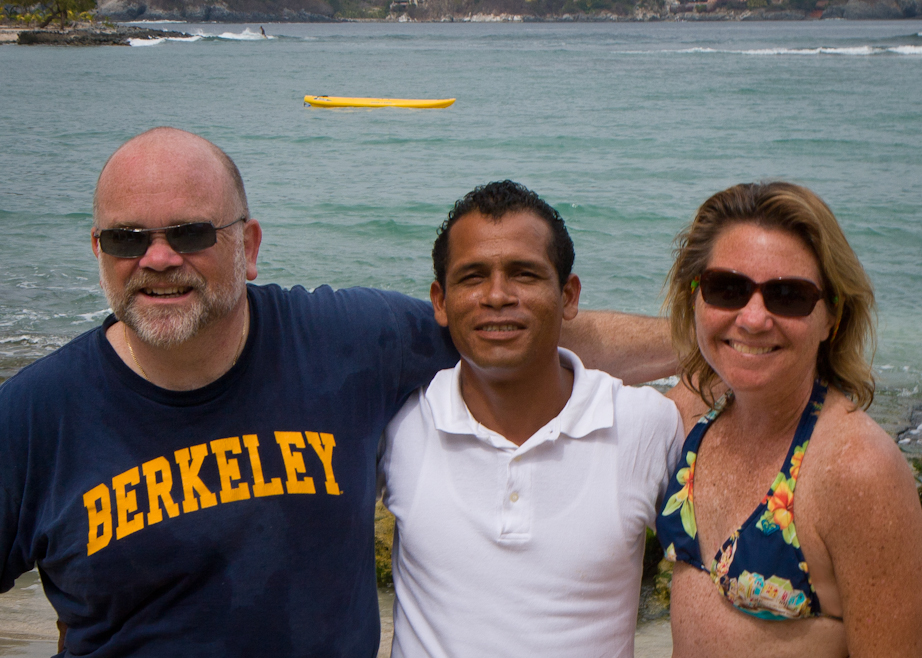 We ended up spending a short amount of time at Miguel’s restaurant because he made us laugh. Miguel said I could take his picture as long as I didn’t show it to the police. Maybe he wasn’t kidding.

There are some small but surfable waves right where the bay opens into the Pacific Ocean. Look close and you can see a surfer in the top left of this image.

This picture was shot late in the afternoon. There are two local children playing in the sand and two tourists wading through the shallow waters. This captures the spirit of Zihuatanejo Bay. 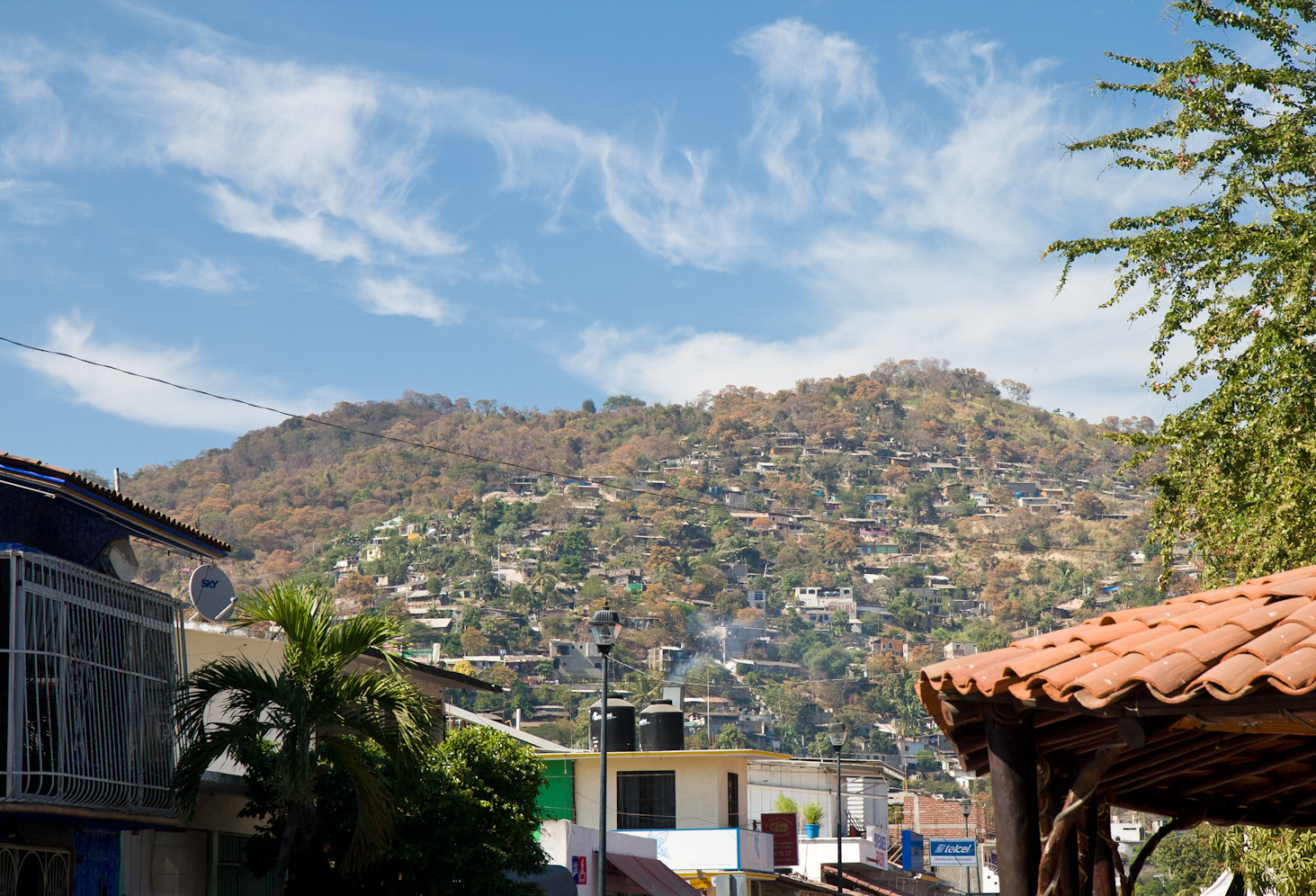